A man’s best friend is more than welcome at the Sallandse Heuvelrug, as long as they are on a leash at all times.

Don’t underestimate the impact of dogs running free in nature. Numerous bird species nest and rest on the forest floor and in the heathland. Moreover, mammals and reptiles are also easily disturbed by dogs on the loose. They are all animals that need their (daytime) rest so that they have enough energy left during the night to find food. Wild animals that are chased or startled too often can die from stress or exhaustion. This is not just chasing in the sense of the dog running after the animals: the presence of a dog that is not on a leash disturbs nature and startles the animals in it. Every year, the rangers come across deer that have literally ran to their deaths against a fence or have been hit by a car.

The most vulnerable period for nature is from April to halfway through June and this is also the period we are extra vigilant at the Sallandse Heuvelrug National Park when it comes to making sure dogs are on a leash, The rangers are especially strict about upholding this rule in the very vulnerable central heathland and the peripheral zones.

In order to meet the wishes of owners to let their dogs off the leash, the Dutch Forest Management Agency has designated a few less vulnerable parts where dogs are allowed to walk freely (see map). But the same applies here: dogs are not allowed to disturb other animals. The owner is responsible for his dog at all times in these roaming areas. Apart from these areas, it is compulsory for dogs to be on a leash in and out of the National Park. This rule is upheld very strictly, especially in springtime.

View the map for roaming areas.

The forest opposite Hellendoorn adventure park is part of the Sallandse Heuvelrug and is called the Hondenbos (Dog Forest) for a reason: here, dogs are allowed to run, play and fool around - the large pit is a particular favourite. The area between the Luttenbergerweg, the Klinkenbeltweg and the Almeloseweg in Nijverdal is a designated roaming area.

Parking tip: at restaurant De Uitkijk on the Hellendoornsebergweg. Or at swimming pool Het Ravijn on the Piet Heinstraat in Nijverdal. This is the same roaming area, here called ‘t Stut.

This area is called Teesselinksveld and is sometimes referred to as Kattebos. Dogs are allowed off the leash here, between the Holterweg and the Lage Esweg up to the Sasbrinksven. See the lower of the two roaming areas in this map. Dogs have to be back on a leash on heathland and on the other side of the Holterweg. Parking tip: (free) in the car park at Holterweg 105.

Where should I start my visit? Where are the toilets and where can I walk my dog? Where are the best sights and most beautiful spots according to our guests? 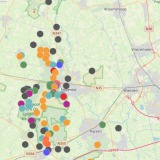 Vind alle informatie op de kaart
Mountains of stories
Inspiring stories and great tips View all
4 nice winter walks
A replica of a ‘markesteen’ where boundaries converged
Top 11 outdoor sports events: your bucket list!
6 great places to eat on the Sallandse Heuvelrug
2 of the most fun restaurants for children - with plenty of room to play
Top 6 outdoor activities for kids. Let’s go outside!
Group outings on the Sallandse Heuvelrug. From water safari to nature photography.
The Holten triathlon